The Trouble with Gold Stars, Incentive Plans, A’s, Praise, and Other Bribes 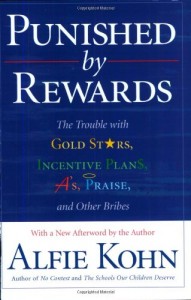 Our basic strategy for raising children, teaching students, and managing workers can be summarized in six words: Do this and you’ll get that. We dangle goodies (from candy bars to sales commissions) in front of people in much the same way that we train the family pet.

In this groundbreaking book, Alfie Kohn shows that while manipulating people with incentives seems to work in the short run, it is a strategy that ultimately fails and even does lasting harm.  Our workplaces and classrooms will continue to decline, he argues, until we begin to question our reliance on a theory of motivation derived from laboratory animals.

Drawing from hundreds of studies, Kohn demonstrates that people actually do inferior work when they are enticed with money, grades, or other incentives. Programs that use rewards to change people’s behavior are similarly ineffective over the long run. Promising goodies to children for good behavior can never produce anything more than temporary obedience. In fact, the more we use artificial inducements to motivate people, the more they lose interest in what we’re bribing them to do. Rewards turn play into work, and work into drudgery.

Step by step, Kohn marshals research and logic to prove that  pay-for-performance plans cannot work; the more an organization relies on incentives, the worse things get. Parents and teachers who care about helping students to learn, meanwhile, should be doing everything possible to help them forget that grades exist. Even praise can become a verbal bribe that gets kids hooked on our approval.

Rewards and punishments are just two sides of the same coin — and the coin doesn’t buy very much. What is needed, Kohn explains, is an alternative to both ways of controlling people. The final chapters offer a practical set of strategies for parents, teachers,  and managers that move beyond the use of carrots or sticks.

Seasoned with humor and familiar examples, Punished by Rewards presents an argument that is unsettling to hear but impossible to dismiss.

“Wonderfully clear, provocative, and satisfying. Alfie Kohn’s groundbreaking exploration of the harmful effects of rewards should be mandatory reading for every parent and teacher.”

“Once again, Alfie Kohn destroys a universal myth — this time convincingly exposing the destructive effects of using rewards to control children and adults. Every parent, teacher, and manager should read this book — and hurry.”

“Unorthodox, occasionally utopian, revolutionary in its implications, this eye-opening critique of behaviorist reward-and-punishment psychology will challenge and enlighten parents, teachers, managers, and the general reader.”

“A compelling argument that the use of rewards is counterproductive in raising children, teaching students, and managing workers….A clear, convincing demonstration…written with style, humor, and authority.”

“Kohn…marshals impressive theoretical support and, at the same time, uses humor disarmingly to argue his case.”