The Case Against Competition 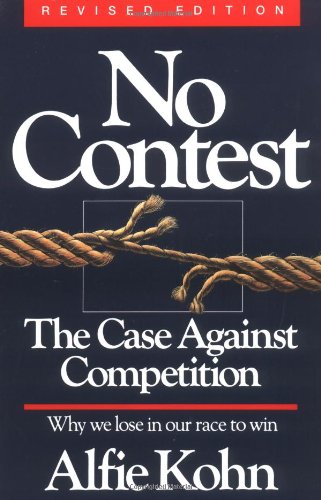 No Contest, which has been stirring up controversy since its publication in 1986, stands as the definitive critique of competition. Drawing from hundreds of studies, Alfie Kohn eloquently argues that our struggle to defeat each other — at work, at school, at play, and at home — turns all of us into losers.

Contrary to the myths with which we have been raised, Kohn shows that competition is not an inevitable part of “human nature.” It does not motivate us to do our best (in fact, the reason our workplaces and schools are in trouble is that they value competitiveness instead of excellence.) Rather than building character, competition sabotages self-esteem and ruins relationships. It even warps recreation by turning the playing field into a battlefield.

No Contest makes a powerful case that “healthy competition” is a contradiction in terms. Because any win/lose arrangement is undesirable, we will have to restructure our institutions for the benefit of ourselves, our children, and our society. For this [1992] revised edition, Kohn adds a comprehensive account of how students can learn more effectively by working cooperatively in the classroom instead of struggling to be Number One. He also offers a pointed and personal afterword, assessing shifts in American thinking on competition and describing reactions to his provocative message.

“Alfie Kohn marshals the evidence that [competition] is not the mainspring of achievement in industry, the arts, education, or games.”

“We have been in prison from wrong teaching.  By perceiving that cooperation is the answer, not competition, Alfie Kohn opens a new world of living.  I am deeply indebted to him.”

“Alfie Kohn’s critique of the role of competition in our society is a really impressive piece of work.  Challenging and thoughtful, it reaches to the heart of many problems of our social life and the ideology that constrains and distorts it.”

“Well‑researched and sound, No Contest exposes erroneous assumptions about the inevitability and value of competition.  This book…deserves our attention.”