And Other Contrarian Essays on Children & Schooling 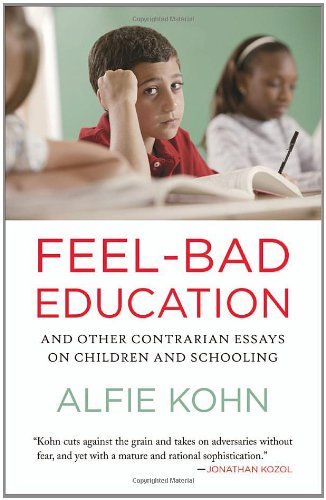 Arguing that our schools are currently in the grip of a “cult of rigor” — a confusion of harder with better that threatens to banish both joy and meaningful intellectual inquiry from our classrooms — Alfie Kohn issues a stirring call to rethink our priorities and reconsider our practices.

Kohn’s latest wide-ranging collection of writings will add to his reputation as one of the most incisive thinkers in the field, who questions the assumptions too often taken for granted in discussions about education and human behavior.

In nineteen recently published essays — and a substantive introduction, new for this volume — Kohn repeatedly invites us to think more deeply about the conventional wisdom. Is self-discipline always desirable? he asks, citing surprising evidence to the contrary. Does academic cheating necessarily indicate a moral failing? Might inspirational posters commonly found on school walls (“Reach for the stars!”) reflect disturbing assumptions about children? Could the use of rubrics for evaluating student learning prove counterproductive?

Subjecting young children to homework, grades, or standardized tests — merely because these things will be required of them later — reminds Kohn of Monty Python’s “getting hit on the head lessons.” And, with tongue firmly in cheek, he declares that we should immediately begin teaching twenty-second century skills.

Whether Kohn is clearing up misconceptions about progressive education or explaining why incentives for healthier living are bound to backfire, debunking the idea that education reform should be driven by concerns about economic competitiveness or putting “Supernanny” in her place, his readers will understand why the Washington Post has said that “teachers and parents who encounter Kohn and his thoughts come away transfixed, ready to change their schools.”

“Kohn looks around at those who think they know what they’re doing and dares to pose a few basic questions – what’s good and what’s bad, what values are we transmitting, and, most radical of all, what do the students themselves think of their own educations?…Whether this kind of critical questioning is a good thing or not depends on your attitudes about the status quo. Socrates, remember, was none too popular with the ancient Athenians. One can only hope there’s a place for someone as passionately dedicated to education as Alfie Kohn.”

“In his newest book…Kohn takes on the educational establishment and its ‘corporate-style version of education reform’ with insight, wisdom, and cheerful fearlessness.”

“Few scholars are more critical or more forthright about the problems with the U.S. educational system than Kohn,…a surprisingly accessible and at times witty educational policy expert.”

“[A] spirited and incisive probe of education today. Though Kohn can be witty and wry, his overarching message is quite sobering…With plenty of data to back up his contrarian views, Kohn asks readers to take a hard look at where America’s classrooms are heading and do whatever is necessary to turn schools from “test prep centers” into joyful environments where kids learn to think for themselves.”

“A vital wake-up call to educators….A philosophical, welluctured argument for viable progressive education from one of the movement’s most prolific and well-regarded authors.”