Discovering How Much Fun Competition Isn’t

[This essay is adapted from the Foreword to Cooperative Games in Education by Suzanne Lyons (Teachers College Press, 2022)]

The reassuring bromide that “there’s no such thing as a stupid question” can be easily refuted by spending a few minutes with a standardized test. But even if it were true, there is certainly such a thing as a depressing question. Over the course of my career, two stand out. The first was from a student after a talk I gave at his overachieving high school. “You’re telling us not to just get in a race for the traditional rewards,” he said. “But what else is there?”

The second question, which I’ve been asked more than once, was posed in each case after I made an off-hand reference to cooperative games as a welcome alternative to the usual competitive kind. My questioner frowns, genuinely confused: “But how could it be a game if there aren’t winners and losers?”

Team games require cooperation, of course, but we’ve come to assume that this just means the players on each team will work together in order to triumph over another group of people who are working together. In other words, cooperation is merely a means; victory is the end. This reality is experienced so continuously and pervasively in our society that children learn (without anyone’s having to tell them) that playing fields are like battlefields; it’s us against them. A game by definition, they’re led to conclude, is a recreational event in which half the players must fail. Even physical activities pursued by individuals (rather than teams), which in theory could be just about doing well and/or having fun — running, swimming, skiing, weight-lifting, gymnastics — are gratuitously turned into adversarial affairs where it’s you against everyone else.*

But the good news is that some games don’t sort players into winners and losers — and are especially delightful precisely because everyone is working together toward the same goal. Only after you’ve had some experience with cooperative games do you fully grasp just how much fun competition isn’t.

In its purest form, the point of play is that it has no point — no goal other than itself. Competitive play is thus a contradiction in terms. A strict definition of play also excludes rule-driven cooperative games, but they at least retain more of a playful spirit. Cooperative board games, like cooperative outdoor activities involving physical exertion, can be thoroughly enjoyable even as they provide challenge, build skills, and offer undiluted camaraderie (as opposed to the warped version that’s contingent on defeating a common enemy). By setting up a scenario where everyone is rooting for everyone else, cooperative games teach children important lessons about the possibility, the practical benefits, and the deep satisfaction of doing things with, rather than against, other people.

Recreation isn’t a self-enclosed arena; it is, willy nilly, a socialization tool that prepares children for adult roles. If the recreation is competitive, then it offers a kind of apprenticeship for life in corporate capitalism, in which other people are regarded as potential obstacles to one’s own success. Sports teach children to accept the value, and even the inevitability, of adversarial relationships in place of solidarity and collective effort. As the sociologist David Riesman memorably put it, “The road to the board room leads through the locker room.”

We can shrug and treat those competitive norms and institutions as facts of life for which children must be prepared (by immersing them in competitive rituals while they’re small). Or we can introduce them to something different. The latter option sends the message that it’s possible to challenge, rather than just accommodate ourselves to, dysfunctional arrangements. It points up that competition is just such an arrangement, ripe for challenge. And it offers a notable example of how structural reform — a far more promising strategy than trying to alter the attitudes of millions of individuals — can happen right here and right now. “Structural” or “systemic” change doesn’t always involve, and needn’t wait for, wholesale social transformation.

“Better get used to it” is a common rationalization not only for subjecting children to competition but for the unfairness of having parents use their greater skill or strength to defeat their kids in competitive games. The alternative is to let the child win, which is patronizing and eventually becomes awkwardly obvious. But cooperative games neatly eliminate the dilemma: Not only is it fine for adults to do their best, but they can share strategies and teach negotiation while having a lot of fun. (Cooperative games are also a perfect complement to cooperative learning, which is the default arrangement in outstanding classrooms from kindergarten through graduate school: students in pairs or small groups making sense of ideas together.)

Some years ago, having accepted an invitation to speak at a conference for physical education teachers, I feared that after laying out the harms of competition I would need a bodyguard in order to leave the room in one piece. Amazingly, my message was warmly received, which reminded me that teaching physical education is a completely different line of work from coaching sports.

You can understand my apprehension, though. After all, the first game that many of us experienced as children is a prototype of artificial scarcity. It typically takes place at a birthday party, where x players must scramble for x-1 chairs every time the music stops. In each round a child is eliminated — out! out! out! — until at the end only one remains triumphantly seated while everyone else is left standing on the sidelines: excluded from play…unhappy…losers. That’s how you’re taught to have a good time in America.

Thank goodness it’s not the only way.

Want to learn more? Two websites where you can find cooperative board games: Family Pastimes and CooperativeGames.com. The former, based in Ontario, has been creating and selling these games for half a century and offers an extensive selection for children and adults. The latter was started by Suzanne Lyons, who wrote the book for which this essay serves as a foreword. A particularly timely (and popular) cooperative game is called Pandemic, which the creator describes here. (I have not been promised any free games in exchange for these endorsements, although I would not return any that happened to arrive.)

The best source for cooperative outdoor games is Terry Orlick’s The Cooperative Sports and Games Book and its imaginatively titled sequel, The Second Cooperative Sports and Games Book. Orlick took a look at Musical Chairs, for example, and realized that the basic format of removing chairs could be kept intact while reversing the goal. The new, pro- rather than anti-social, objective is to fit all the players on a steadily diminishing number of seats.  At the end, giggling children are hanging on to each other and calling out suggestions for how everyone can squish onto a single chair.  Everybody plays to the end; everybody has a good time. (I can vouch for this, having used this version at my own kids’ birthday parties. See photo of the early stages of one such game; my daughter Abigail is at left in the foreground.) 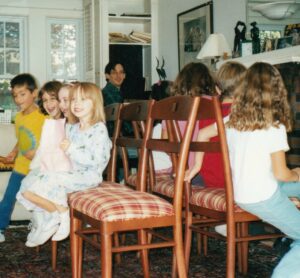 Another example from Orlick’s books is Bump and Scoot — a lovely alternative to standard (competitive) volleyball. Here, each player who hits the ball over the net immediately runs under the net and joins the other team. The goal is for everyone to change sides at least once without having the ball hit the ground. At the end, the question “Who won?” is obviously impossible to answer because the membership of the teams is fluid. More to the point, the question is irrelevant because, thanks to the absence of competition, everyone is having too much fun to think about that.

As early as 1950, Theodore F. Lentz and Ruth Cornelius published their own manual of cooperative games. Among them were Cooperative Chinese Checkers, the object of which is not to move one’s marbles faster than the other player but to coordinate the two players’ movements so they reach their respective home sections simultaneously. In Cooperative Bowling, meanwhile, the purpose is to knock down the ten pins in as many rounds as there are players – a very challenging task. Other cooperative games require that each player make a specified contribution to the goal, that all the players attempt to reach a certain score, or that all players work together against a time limit. The common denominators are that everyone works with, rather than against, one another; everyone succeeds or fails together; and everyone has fun.

* In a truly pathological culture, competition metastasizes to non-physical pursuits so that students are pitted against each other even when they’re, say, performing individually or singing together or designing experiments. Talent “shows,” choral “festivals,” and science “fairs” are all set up as competitions. It’s the same when kids write poetry or computer code, when they show off their mastery of oratory, math, geography, or spelling — the unspoken rule is that all these things must take place in the context of a contest, such that the goal is to beat other kids who are doing the same thing. With team sports, of course, competition is baked in; to avoid it, football, baseball, basketball, hockey, and soccer would need to be replaced with different games. In a way it’s even sadder that we impose competition on activities that aren’t inherently competitive.

To be notified whenever a new article or blog is posted on this site, please enter your e-mail address at www.alfiekohn.org/sign-up .